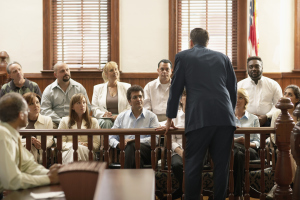 Some psychologists are experts in discrediting eyewitness testimony. The experts can explain to the jury how human perception works, how people fill in blanks subconsciously, how when a gun is involved in a crime, the witness will focus on the gun and not even look at the person behind it; they can explain why a witness can truly believe they saw something that they just did not see. Our Nashville criminal defense lawyer is an expert and will increase your odds in court.

However, this area of expertise is still in its infancy and judges are currently distrusting of such testimony. Assuming the judge does not allow the testimony, how then can an eyewitness’ version be attacked … especially an eyewitness who seems likeable and trustworthy?

For instance, a thin, pretty woman in her 30s wearing a long white dress with flowers on it takes the stand, points at the defendant, and under oath says, “He is the man who entered my home without permission on May 1 around 11:00 a.m., pushed me down, and robbed me of the $2,500 I had in cash because I had just gotten my paycheck.”

Every witness has some frailty to expose. Finding out as much as possible about each witness is key. Perhaps the witness’ eyesight isn’t as good as it could be, therefore making a demonstration of their insufficient eyesight critical.

All of these frailties would call into question the reliability of the witness. This information can be gathered in many ways; a professional investigator can be hired, friends and coworkers of the witness can be interviewed and a search of the witness’ social media may reveal the answers needed. Every piece of information gathered about each witness is ammunition to be used on cross examination.

Even assuming the witness comes out of the investigation into their life without a scratch, inconsistencies inside the witness’ own version of events are often the most damning counter to their testimony. The witness will always testify to the day, time, and background of the incident, information you can get them to reaffirm on cross examination:

All of which is likely to be information contained in the police report which the witness will have reviewed many times before trial. Once you have the witness agreeing to the basic facts, the questioning can get more specific.

Once the witness has committed to answers in the before-mentioned background-type questions, then you can get to the point you want the jury to understand.

(Q) Would it surprise you that Mr. Jones said your company doesn’t hand out checks until the end of the day on payday?
(A) They must have handed them out early that day.
(Q) You said you were working late a lot because of a project, but that day you went home
early?
(A) I must have been tired that day.
(Q) Assuming you were working the 50 hours a week you claim, at $15 an hour, even with time and a half for the overtime, your paycheck would only have been $1650 for 2 weeks, not $2500 isn’t that true?
(A) It had to be $2500.
(Q) Because that’s what you told the police, $2500?
(A) Yes.
(Q) And you used that police report to file a claim with your homeowner’s insurance company, didn’t you?
(A) Yes.

Now the jury gets to start considering why this witness might not have been as trustworthy as she seemed at first, and the questioning would only get more specific as the testimony continued.

When one witness’ testimony differs from another witness’ testimony, the jury is often left trying to decide who to believe. Continuing with our example above, a defense witness takes the stand later and says “the defendant is my employee, I can tell you that on May 1 he was at work. Our work day is 8 to 5 with a 1 hour lunch between noon and 1pm. Our office is 10 miles from where the crime occurred.”

The argument can be made that this witness is more trustworthy than the first witness. Why? This witness has no stake in the outcome, she is just the defendant’s employer, not a family member, spouse or even a friend. Also, though the argument could be made that the defendant may have taken an early lunch, the crime is alleged to have occurred at 11:00 a.m. ten miles from where the defendant works. Wouldn’t the defendant have had to leave at 10:30 a.m. to commit the crime? Keep in mind, it is not the defendant’s job to prove he is innocent. The prosecution has to prove the case beyond a reasonable doubt. Wouldn’t it be reasonable that if the accused left work at 10:30 a.m. his boss would notice? Conflicts between two witnesses are very difficult for the jury to reconcile.

Focusing the jury away from the adverse eyewitness
Even after all testimony concludes, the task of discrediting an eyewitness continues during closing argument.

Not only would the deficiencies previously stated be concentrated on in closing, but additionally the closing argument should shift focus from what the prosecution presented to the jury (the eyewitness’ testimony) to instead what they have not presented. Was DNA provided? Fingerprints? Additional witnesses?

The jury should be left with the question of why there was a lack of corroboration for the mere word of one person whose frailties have already been exposed, whose testimony contradicted itself and contradicted the testimony of other more trustworthy witnesses.

No juror wants to be responsible for convicting an innocent person. If the eyewitness’ testimony is effectively attacked, each juror can be confident in voting Not Guilty.

This the kind of attack on eyewitness testimony that a good Nashville criminal defense lawyer should provide. This is the kind of defense work you receive from Horst Law. .