Recently I posted a short video on YouTube and Facebook stating that, in my opinion, it is sometimes better to take the breath or blood test if you have been stopped for DUI than to refuse the test. You can view the full video below.

That post generated a number of comments from individuals disagreeing with me. Since the video is very short and does not provide much detail in support of my opinion I decided that a follow up article to that video is in order.

The Tennessee implied consent statute is found in the Tennessee Code at title 55, chapter 10, part 406 (T.C.A. 55-10-406). The implied consent statute allows a police officer to request that you take a breath or blood test to determine the amount of alcohol in your system if he has probable cause that you are driving under the influence and has placed you under arrest for D.U.I.

A refusal of the test is admissible in a trial to allow the prosecutor to argue that you knew you were D.U.I. and that is why you refused the test.

You have been out to dinner with friends and had two glasses of wine while you not only had the main course but also had bread, and desert. You were at buddy’s house watching the game and had two beers while downing chips, wings, and that bowl of popcorn. You know your limit and you know that given what you drank, what you had eaten, and the time period involved you are able to drive safely and that you would not be over the legal limit. On the way home you commit a minor traffic infraction and get pulled over. The officer smells an odor of alcohol. He has you step out of the vehicle and do the field sobriety tests (the walk and turn, one leg stand, or other tests). 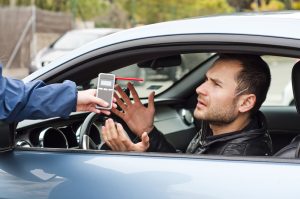 In his opinion you fail those tests, which is no surprise. These tests will be the subject of a future article, but they are very subjective. In my opinion, they not valid in many cases and are a very poor indicator if someone is under the influence. Nevertheless, due to the fact that the officer smelled alcohol, and in his opinion you failed the field sobriety tests, he now places you under arrest and asks you to take the breath or blood test in order to determine what your blood alcohol limit is.

Scenario #1: You refuse the test

You will in all likelihood have your license suspended for refusing the breath or blood test. However, the worst thing is that it makes your case much harder to defend. When that case makes it to the jury and they hear that you refused the test, it makes the officer’s subjective opinion that you were intoxicated and his subjective opinion that you failed the field sobriety tests much more believable because, after all, you refused the test. It also makes the case much more difficult in many jurisdictions. Certainly in Davidson County, Nashville, Tennessee it is difficult to plea bargain because the DA is much less likely to cut you a good deal and drop the DUI because they do not like to reward drivers who refuse the test. Refusing in this scenario simply greatly increases the chances that you will actually be found guilty of D.U.I., even though you may not have been guilty simply because you followed the advice to never ever take the breath or blood test.

Scenario #2: You take the test

I have defended both scenarios above and been able to obtain much better and much quicker results in the scenario where the client took the test and the result was below or barely over the legal limit.

Some of the opposition to my opinion asserts that when a person has been drinking they always believe they are OK and therefore always believe that they will pass the test. In other words because their judgment is impaired by drinking they can not be sure they have not drank too much to drive. I do understand that is a problem and that is why I have qualified my opinion on this matter to state that:

If you are out for a night of drinking or if you are at that dinner party or ball game and you have had enough to drink that you cannot immediately recall with certainty the number of drinks you had and you have to start counting them up in your head DO NOT UNDER ANY CIRCUMSTANCE TAKE THE TEST BECAUSE YOU WILL LIKELY BE OVER THE LIMIT AND WILL BE MUCH MORE OVER THE LIMIT THAN YOU REALIZE.

A good rule: know your limit. Set that limit ahead of time. If you have just one more drink than what you are certain that limit is you know you are not driving home and you hand off or lock up your keys. Period!

AS ALWAYS THE BEST ADVICE IS TO NOT DRINK AND DRIVE. I HAVE SAID IT BEFORE AND WILL SAY IT AGAIN – UBER IS THE BEST THING GOING. IF YOU’RE DOING ANY DRINKING AWAY FROM HOME CALL UBER. A $25.00 UBER FARE IS 100 TIMES LESS THAN MY $2,500.00 RETAINER FEE. Frankly, Uber should start paying me for my endorsements. Above and beyond all else please be safe out there.

Brent Horst, Board Certified Criminal Trial Specialist by the NBTA
Licensed in Tennessee and Florida.
Date of Article 16 Jan 2017.
This article is for general informational purposes only and is not intended as legal advise. The
author does not warrant that the information is current after the date that the article is first
published. Always consult a qualified lawyer to discuss the particular facts of your case.